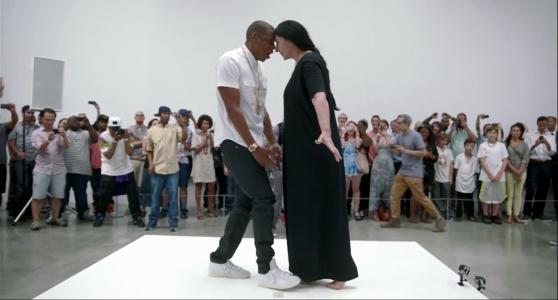 This past Friday, Jay Z(or the artist formerly known as Jay-Z) released a short film, which can be seen as a modern day version of a music video for his song “Picasso Baby”. The 11 minute short, made an unconventional debut on HBO and was aired after his appearance on “Real Time with Bill Maher”. Shot by director Mark Romanek, the film documents Jay’s tight-lipped spur of the moment performance art piece of the song at Pace Gallery in the Chelsea section of NYC. If you’ve been listening to Jiggaman’s lyrics lately, you’ll hear he’s been making many references to fine art on the Magna Carta Holy Grail and Watch the Throne album. Some of the artists prevalent in his lyrics are Pop Art pioneer Andy Warhol and 80’s neo-expressionist artist Jean-Michel Basquiat, both of which he and his wife Beyonce have original works of theirs  in their personal collection. However, if you’re familiar with Jay Z’s catalog, before he became “HOV”, you’ll know he’s been dropping art references as early as his first album Reasonable Doubt. On his brilliantly humorous and condescending “Friend or Foe” verse he says “If you draw/better be Picasso/you know the best/cuz if this is not so…ehhh.. god bless”. After all the references sprinkled throughout verses, Jay finally devotes an entire song to art and even more brings it into the consciousness of his fans. This time he went a step further and became a performance artist by performing “Picasso Baby” for 6 hours straight at the well respected Pace Gallery.

Invited to the performance were visual artists, dancers, gallerists, directors, and actors that Jay Z either knows personally or whose work he respects. Included in the bunch was visual artist George Condo who Jay references in the song and who was also commissioned to create the cover artwork for Kanye’s My Beautiful Dark Twisted Fantasy. Also present was Fab 5 Freddy, filmmaker, artist and longtime close friend of Basquiat, artist Mickalene Thomas who had a major exhibition at Brooklyn Museum last year and the “Grandmother of Performance Art” herself, Marina Abramovic. An artist who I’ve recently discovered, Brooklyn based improv dancer Storyboard P, who did an amazing dance performance to Kanye’s Crack Music. Vogue did a great photo shoot with most of the artists with their comments about the experience of being at the filming.

One interesting point Jay made in an interview speaking on the song, is how back in the early 80’s the music and art worlds were very much interconnected. It was a time when artists and musicians hung out together. Where you might go in a club like The World and see both Prince and Keith Haring hanging out. Even Blondie’s Debbie Harry reached out to Fab 5 Freddy to learn more about the burgeoning culture of Hip-Hop which included graffiti artists. The result was the music video for “The Rapture” with a guest appearance by Basquiat. One thing I’ve always respected about Jay Z was his ability to bring awareness to other regions and movements within Hip-Hop. By collaborating with artists like Juvenile in the late 90’s he brought awareness to the scene in New Orleans which led to the successful careers of Mannie Fresh and Lil Wayne. In the early 2000’s he collaborated with the Houston duo UGK, which brought their already legendary status at the time to a wider audience and the public’s eyes to the scene in Houston. Even his often criticized homages to the late rappers Notorious B.I.G. and Big L, who were his friends, may bring their music and legacies to a new generation. I see this as an extension of that. The art references, the invitation of established and emerging artists to his performance piece is an entryway into fine art. He’s laying the groundwork for his audience to have a greater appreciation of art on all levels. It’s a great use of power from someone who has significant influence on popular culture. Even if his attempts to break the barriers of the fine art world doesn’t work, he’ll still be waking up every morning next to Mona Lisa.